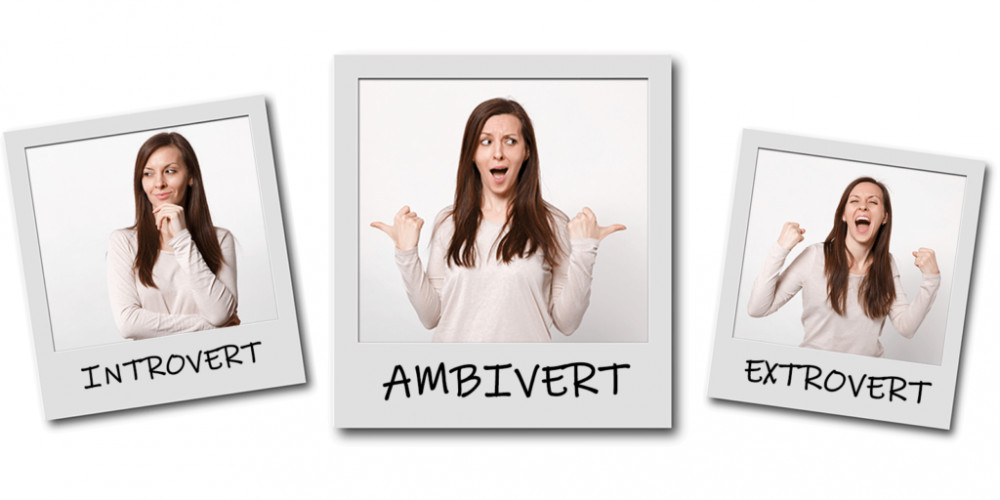 Psychological studies of personality have long been focused on extremes: introversion and extroversion. Today, however, they are increasingly focused on studying what is in the middle, on ambivert.

Emery Bernardo likes to spend most of his time alone, meditating, practicing and working. When he goes out to dinner or drinks with friends, he sometimes, imperceptibly, in silence, observes other people’s facial expressions and body language. Often, while shopping, he ignores people he knows – pretends not to see them – to avoid unnecessary chatter.

However, this 27-year-old dance instructor, who lives in Glendale, California, considers himself a social person and meets new people almost everywhere – in the gym, Starbucks, while boarding a plane… Mr. Bernardo is at parties, most often the person a circle that “flaunts” its break dance moves.

Is Mr. Bernardo an introvert or an extrovert?

In fact, he is an ambivert, a compact mix of both!

The personality traits of extroversion and introversion are on the continuum and almost all attention is focused on these two ends. Today, social psychologists, behaviorists and experts in the field of business are paying more and more attention to the forgotten category in the middle – ambition. They came to the conclusion that peopled who have these personality traits may have some advantages in professional and personal adaptability.

Experts believe that personality traits that are on the continuum of introversion – extroversion, stable and last a lifetime – appear at birth and are difficult to change. At one end are extroverts (sometimes called “extroverts” in psychological circles) who are looking for external stimulation. They like to be surrounded by a multitude of people and to be the center of attention. They enjoy exchanging ideas with others and often form their own thoughts as they speak. When they are alone, they easily get bored and do not know what to do with themselves.

Introverts, who are at the other end of the continuum, are stimulated from within. They prefer to spend time alone, with one person or a small group of people. They feel exhausted when they are in a crowd or in a long social interaction. They carefully gather their thoughts before speaking. 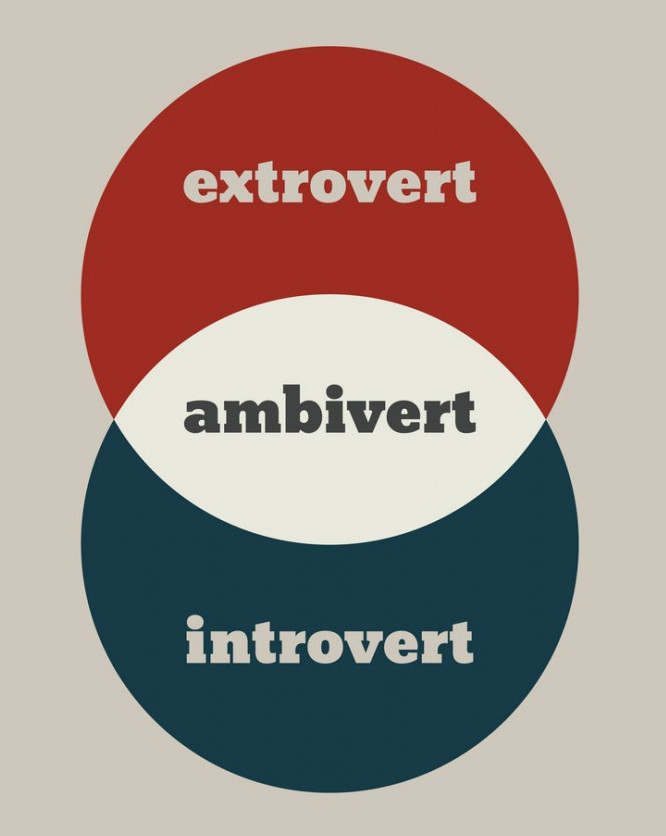 • Social flexibility – they feel comfortable both in social situations and when they are alone.

• Good at communication – intuitively know when to speak or listen.

• Moderate in behavior – neither too cordial nor too reserved.

• Adaptable – do not have some common behavior, adjust their approach to fit the situation.

• Seeks external stimulation – in people, the environment or activities.

• Processes thoughts as he speaks.

• Internal stimulation – likes to be alone.

• Longs for solitude when in company.

• Speak only when he has something to say.

• Think before you speak, process thoughts within yourself.

Ambivert’s have personality traits of both introverts and extroverts, but none are dominant. The result is a balanced or nuanced personality. They are not peopled who will “pierce” your ears, nor are they those completely silent peopled who happily sit in the corner.

Ambivert’s move between sociability and loneliness, speaking or listening carefully and all this is much more natural than with extroverts and introverts. “It’s like they’re bilingual,” says Daniel Pink, author of the TV series on human behavior “Crowd control,” which studies ambivalence. “They have a wider range of abilities and can connect with more people, like a person who speaks both Spanish and English,” adds Pink. 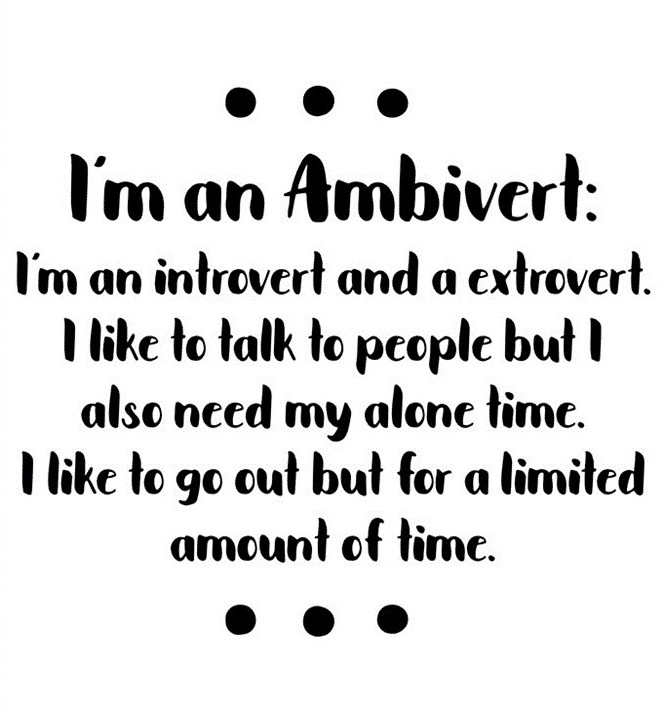 You can check if you are also an ambivert by asking yourself questions about how you would behave in certain situations. Example:

When you are at a social event, when you want to leave – as soon as possible or in the end, after the last person leaves?

As you talk, do you prefer to think about your answer before you say it or “throw out” any idea that comes to your mind and then work it out?

If you are ambitious, you will usually choose something in between – you will choose to go for a drink with a friend after work, and after coming home, you will go for a long walk with the dog.

A study of ambivalence, published in June 2013 in the journal Psychological Science and covering 340 salespeople, found that the social and emotional flexibility of ambitious respondents led them to be superior salespeople. Respondents first completed a personality test, and then the researchers tracked the sales revenue of each of them for the next three months, controlling other variables. Employees with the highest percentage of hourly sales – an average of $208, compared to $138 (average of the entire sample) – were ambivert’s who had a score on the personality test exactly between introversion and extroversion. 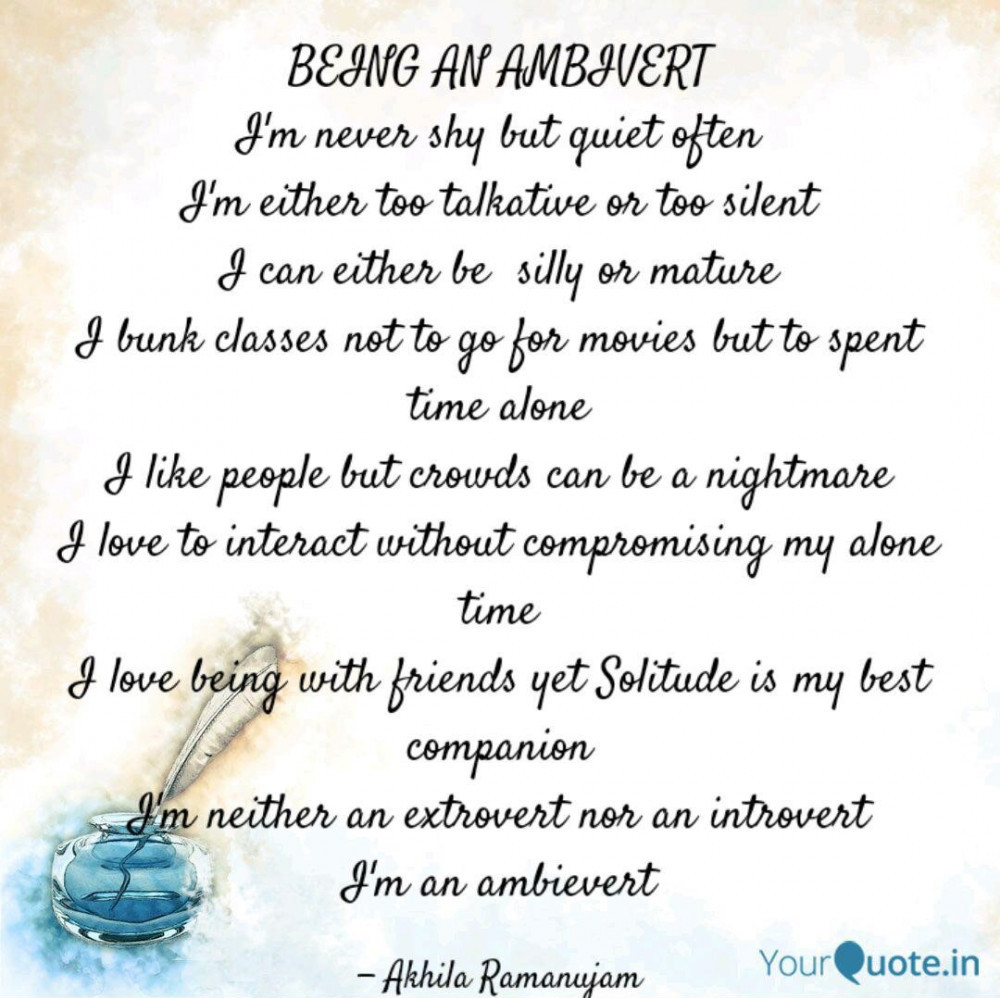 “Ambivert’s are like Goldilocks – they don’t give too much or too little”, said Adam Grant, an organizational psychologist and professor of psychology at the University of Pennsylvania. He believes that emotional sensitivity provides ambivert’s with a unique skill useful for parenting and marriage.

According to Dr. Grant, the weakness of the ambiance is that it is sometimes difficult for them to know which side of the personality to use in a certain situation. Unlike extroverts and introverts who know what stimulates them, ambivertist’s are not always so sure. This means that sometimes they can get stuck – not realizing that they need to change their approach in order to be more motivated.

Karl Jung popularized the concepts of extroversion and introversion in the early 1920s. He also identified a third group, but did not name or write much about it. It was not until 1940 that the term “ambivert” began to be used more and more often among psychologists.

Ambiguity has only gained more attention in recent years, it has become represented in books, speeches, and consulting firms have expanded their focus on introversion and how personality traits affect the behavior of people in marriage, family and work? More than half of the population is ambitious, according to Dr. Grant.

His research shows that approximately 2/3 of people are ambivert, while 1/3 are either extreme introverts or extreme extroverts.

” Introverts and extroverts know pretty well what they crave,” says Lori Helgo, author of The Power of Introverts: What Your Inner Life Is, Your Skiven Power. She believes that introverts in general, want to move away from stimulation and interaction and regroup, while extroverts search for people and activity. Ambivert’s can go either way, depending on the situation.

If you are an ambivert, be aware of that, says Dr. Helgo. “If you are aware that you can go both ways, then you can see what the situation is like and choose the behavior that will be most effective and useful.”

Think of “introvert” and “extrovert” as verbs, says Beth Bulow, a speaker and coach who founded the introvert site “The introvert entrepreneur”. “You can choose to close (introversion) or open (extroversion) depending on what is required.”

Dr. Grant warns that ambivert’s should be careful not to get stuck in the role of introvert or extrovert. They should stay free. Also, staying on one side or the other for too long can suffocate the ambivert. Boredom and fatigue will be warning signs.

Dr. Grant recommends, “Release your inner ambivert. Consider each situation carefully and ask yourself, “What can I do now to be happier or more successful?” 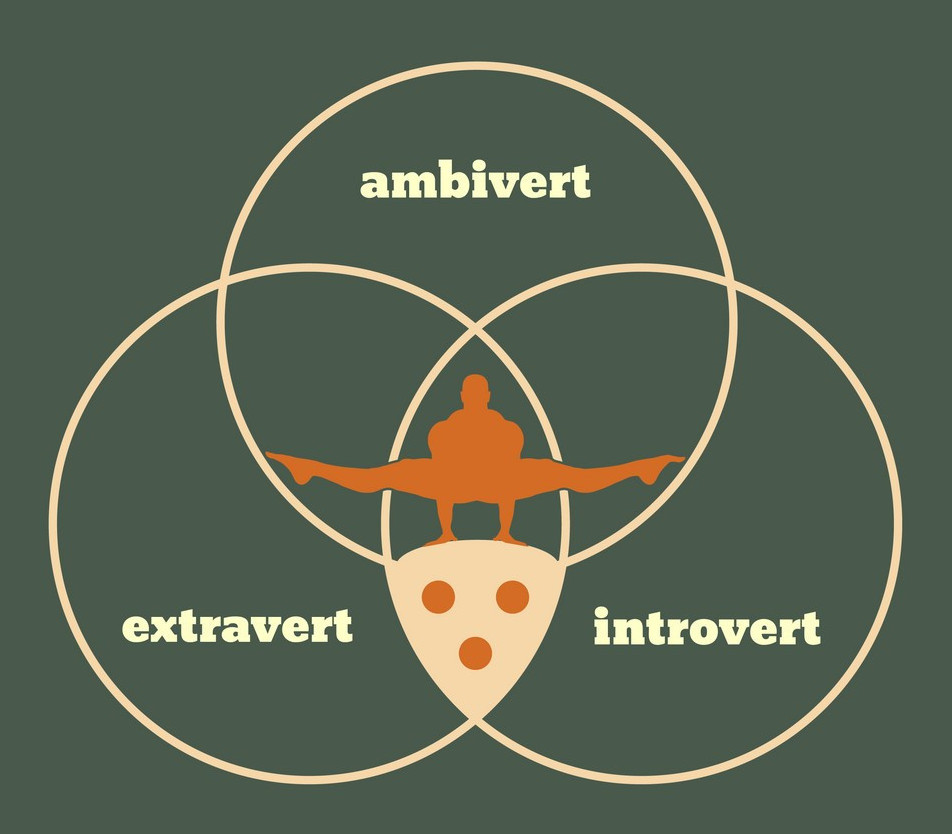