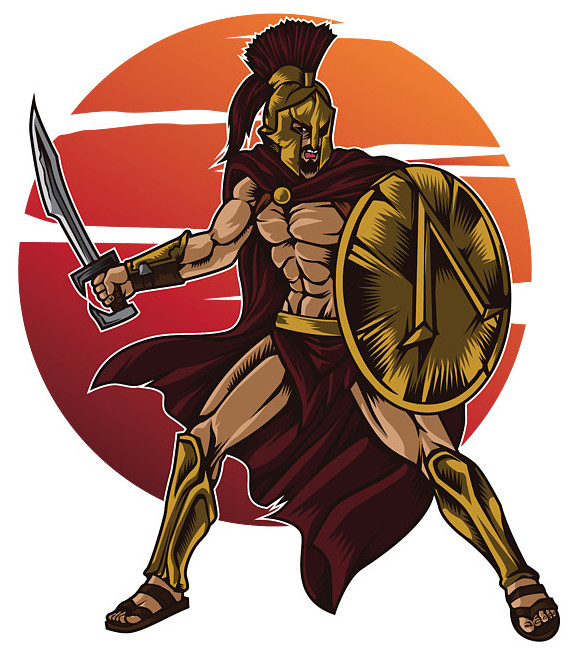 Sparta has always been considered a special form of Greek culture. Unlike our Greek compatriots, who are remembered for their masterpieces of art and philosophy, we remember the Spartans for their unique way of life. Warfare, striving to preserve parts, courage, and the desire to be better, enabled Sparta to be the leading power of the Hellenic world for centuries. They are known for their brevity, simplicity, and ingenuity in speech. Plato said that even next to the average Spartan, every Greek feels like a small child. The Spartan king Lycurgus, established the social order and the foundations of the law. Law enforcement, which was never written down, relied on the structure of government and the morality of those who ran the country. The goal of the whole way of life in Sparta was to reduce the sense of the value of the material and increase the sense of the value of what they considered the most valuable – human virtues.

In this article, entitled “The Spartan Teaching of Fear“, I will introduce you to the ways in which the Spartans opposed fear and how they overcame it! Their methods, in a customized form, can be applied today!

Spartan war teachings were based on the individual and on building his “warrior character.” Warfare and upbringing were primarily directed towards oneself and the weaknesses that the warrior had within himself. It was the first battlefield where young Spartans fought. Every kind of weakness, whether physical or character, was a shortcoming that a warrior must overcome. A Spartan with as few flaws and as many virtues as possible will surely be a better warrior.

The first step in building a warrior was upbringing. Spartan children did not belong to their parents but to the state. This way of looking at posterity, as unacceptable and strange as it is to us today, created a characteristic sense of unity. The Spartan was considered at the same time the father, son, and brother of other Spartans. Guided by that idea, they gave their best for the survival of the state. The state was the ideal, ahead of the interests of the individual. The upbringing itself, from childhood to adulthood, is out of the context of this article, but each part of that process was carefully designed and under the supervision of the elders, who went through it themselves. 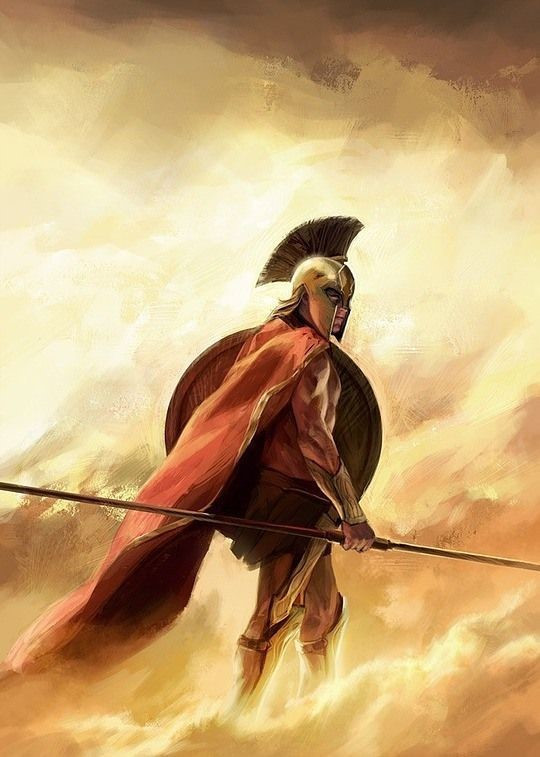 Fear, Phobos, occurs in every physical conflict, and especially in battle. As a defense mechanism, the secretion of hormones, increased rhythm of breathing, and heart rate prepares the body for danger. Fear is a natural reaction. But, if it is not controlled, it leads to panic, which paralyzes the organism and leaves it to external influences.

One of the principles of Spartan phonology Fear was constant contact with fear so that when it appeared, it would be something familiar and common. Aware of these insights, the Spartans were experts in the study of fear and daily work with it to such an extent that even the law encouraged work with fear. An example of this was the ban on the use of street lighting and torches to illuminate the road at night.

In addition, since enemies also feel it, fear can be a strong ally.

Therefore, they took care of the appearance and organization of combat formations, which, with their appearance and attitude, should have aroused a feeling of fear in the enemy.

In order to overcome their own fear, they used songs, especially those about great heroic deeds, which filled the hearts of warriors with a sense of glory and honor. They taught the children to react to fear and attacks with humor. They thought that a good sense of humor could overcome instinctive reactions of the body. Spartan jokes with which they responded to enemy intimidation are well-known. The art of song, the sense of humor, and the knowledge of breathing techniques were the pillars of the skills of the Spartan teaching about fear.

When Xerxes told Leonidas to surrender his weapon before the battle of Thermopylae, 480 BC, Leonidas replied: “Come and get it”! 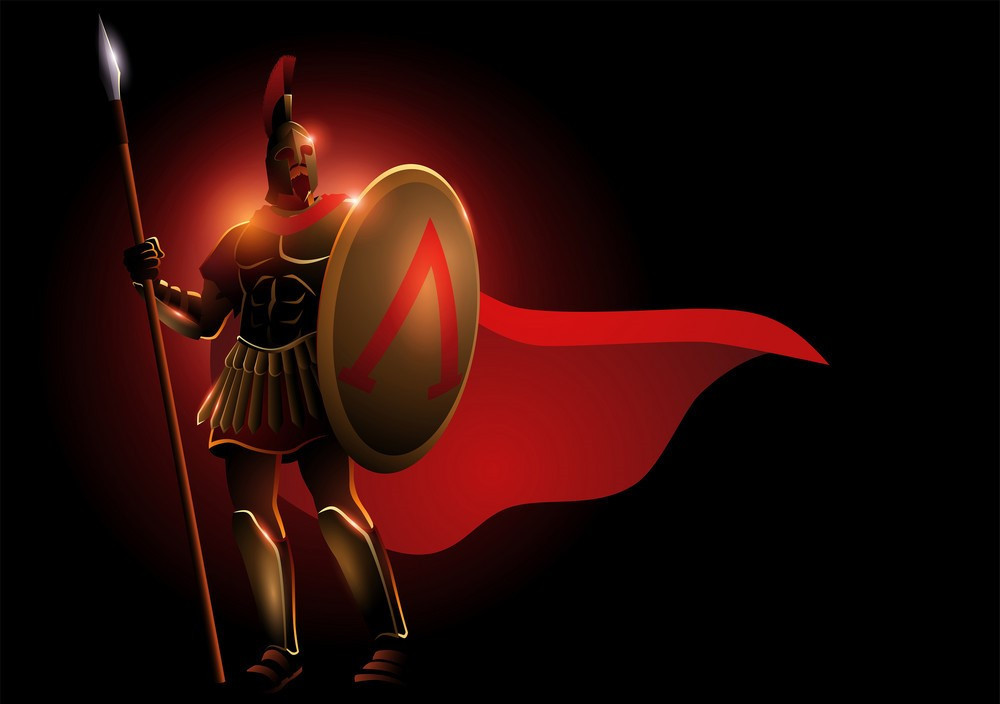 Four ways to act in relation to fear

Within phonology Fear, there are four ways to deal with fear. They culminate in a virtue opposite to fear, and the final victory over fear is possible only if that virtue exists. These four stages are the steps that lead to andreie, warrior courage, or the destruction of fear.

The first step in the fight against fear was “acting in spite of fear”.

The Spartans say that a warrior when he is in a situation of fighting for his life, surrounded by the constant presence of death and forced to watch the horrors of war, enters a state of mental deprivation, which they called catalepsy or obsession. In this state, the warrior acts solely out of panic or instinct, without thought or caution, simply fighting without worrying about the consequences. This is what is called “war madness”, which is described by many chroniclers of war. In a state of catalepsy, the warrior could accomplish great feats, but these deeds were never recognized as deeds made of courage or virtue, because animals, brought into a situation of struggle for their own survival, behave in the same way. This way of acting in Sparta was criticized because they thought that it turned man into its opposite, the beast.

In this way, they aspired to what we call the “Spartan way of life”, i.e. by the constant search for virtue that Lycurgus, their legislator, implanted in the hearts of his fellow citizens. The fear of embarrassing fathers, family, friends, themselves, and ultimately, their own city, was stronger than the fear of dying in battle. Because of that, many chooses to die rather than return home humiliated by the enemy. Due to the nature of this action, which contains reflection, and not just the action of instinct, it is more sublime than catalepsy, but it is by no means andreia – warrior courage.

The third stage of learning about fear was acting because of the “pursuit of glory”.

The dose of nobility contained in such action makes it closer to the Spartan ideal of human behavior than the previous two. We find an example in the motivations and spirit that moved the Olympic winners. The warrior’s shield, which was worn on the left hand, also protects the exposed right side of the comrade in battle. It was therefore a special honor to fight alongside the king, as his protector. Rare are those who have proven themselves in life and struggle to get that privilege, and among them were the winners of Olympic competitions.

Plutarch tells the story of a Spartan winner of the Olympic Games, to whom a merchant offered a reward for his victory. After the winner refused the prize, the merchant asked him in astonishment why so much effort and sacrifice without any prize? The answer was that the opportunity to fight alongside the king was the greatest reward he would receive. 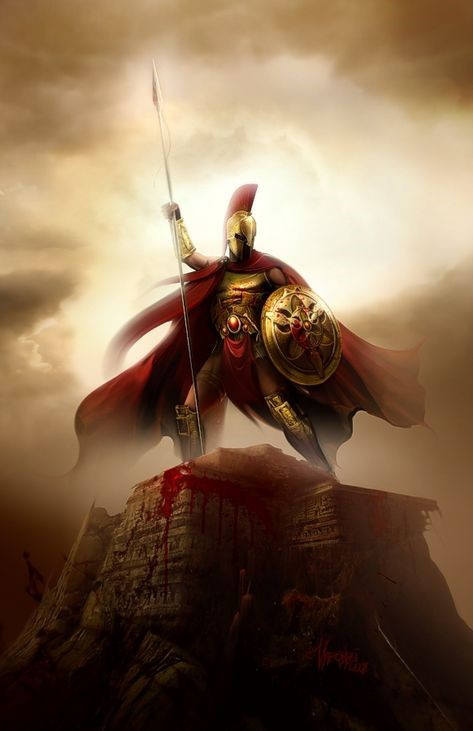 This special way of overcoming fear often considered superhuman, enables the realization of great heroic deeds. Yet, despite his efforts and sacrifices, the root of such an act is still selfish. Therefore, such action cannot be divine.

Phobos – fear – is a property of the material world and is born from the physical, having its source in the body. Aphobia – courage – is of a divine nature and its source is in virtue.

The warrior who developed his virtues was glorified because of them and consequently had divine characteristics in the material world. These were the preconditions needed to call a person a demigod. Further, it was believed that the essence of warrior virtue lies in women’s principles. The Greek words Phobos and tromos, synonyms for fear, are masculine, while the words andreia and Aphobia are feminine. An almost identical approach to such thinking about warrior courage can be seen in the Japanese warriors, samurai, who believed that a warrior, in addition to the path of the sword, also needed the path of the pen. Namely, the samurai believed that the highest quality of one’s personality can be expressed only by the development of nature opposite to itself. Thus, the warrior had to “soften” his rigidity with poetry, calligraphy, or some other form of human skill that develops a connection with the intangible, transcendent, while for samurai women, who in Japanese society at the time occupied a special caste, they recommended practicing practical things and handling weapons.

Spartan thinking was similar. The Spartans found an example of victory over fear and the behavior of a warrior in their own mothers and husbands. There is nothing more natural for a mother than protecting her child. What impressed the Spartan warriors was watching their mothers and wives watch their own fathers, husbands, and sons as they step to their deaths. With dignity and without tears, they sent them warnings to guard their honor and honor of Sparta, and suppressed their natural maternal instincts by giving what was most valuable to them for something more, for the State.

Spartan mothers gave a shield to their sons and told them to return “Either with a shield or on it”. 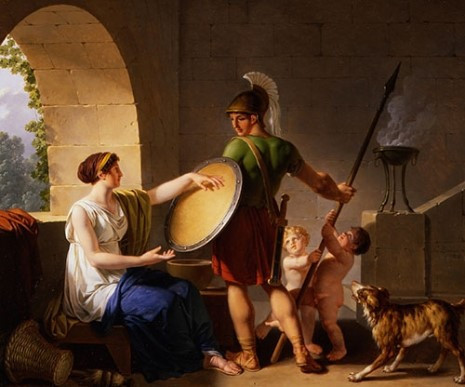 It is in this place that the fourth and final step in attaining Aphobia is born, and that is “self-government”.

Only when one manages to control instincts and instincts, one can express the best in an individual. This “self-government” transferred to the fight, leads the warrior to a level higher than usual. In this state, the warrior intelligently controls all the reactions of his body and is not affected by the circumstances of the fight. Coming in contact with Andrew – warrior courage, there is nothing selfish in his deeds and his actions are not reflected in himself. This state can be achieved only if the action is guided by something higher, IE an ideal. Since the ideal is transcendent and archetypal, it comes from the divine and as such becomes a link between the warrior and the divine.

According to the Spartans, this is the greatest achievement of a warrior, because his actions no longer have a source in himself, but is something higher. This state can be experienced only when there is a deep love for the ideal in the deepest intimacy of the warrior. For the Spartans, love is the opposite of fear and at the same time the highest and most glorious point that a man can achieve through warfare. This relationship between warriors and love was shown in Greek paintings by the intimate relationship between Aphrodite – the goddess of love and Ares – the god of war. Overcoming fear in the way described above, the one who fights, at the same time has a great love for everyone around him, including enemies.

Learning about fear and the Spartan way of life, they had the task of building a man and leading him to the best in him. This way of thinking, as much as it is foreign to today’s man because it connects something destructive and constructive, was present not only among the Spartans but also in other chivalrous societies. One of the examples is the mentioned samurai way of life, in the background of which is the pursuit of the ideal. This summary of the Spartan doctrine of fear speaks of an approach to life that often runs through other Greek polis as well. Perhaps because of him, not only the Spartans but also other Greeks, despite numerous opponents, won the battles for the survival of their own culture and way of life. 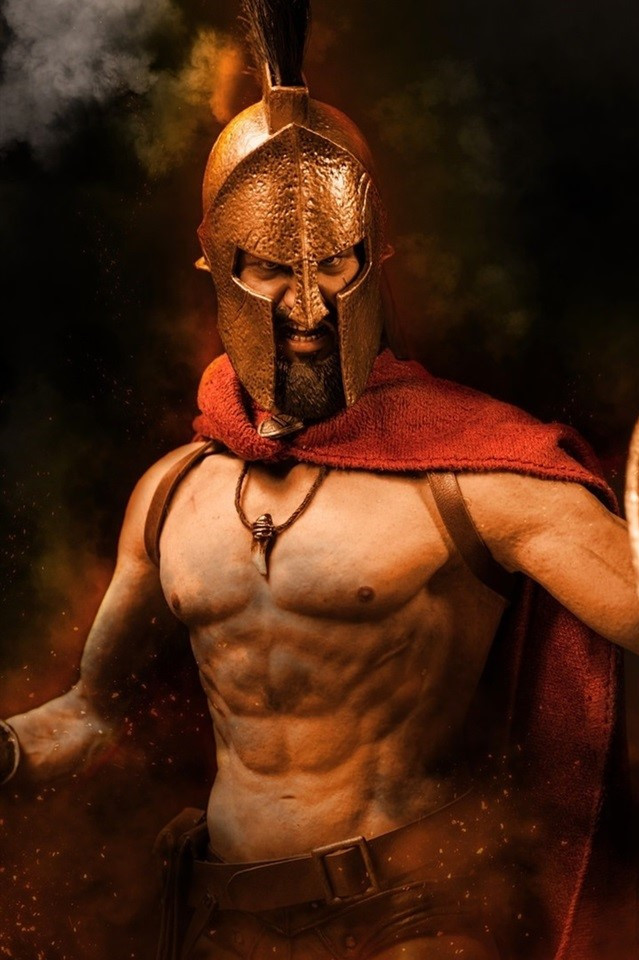 I hope you liked the content about the Spartan doctrine of fear?