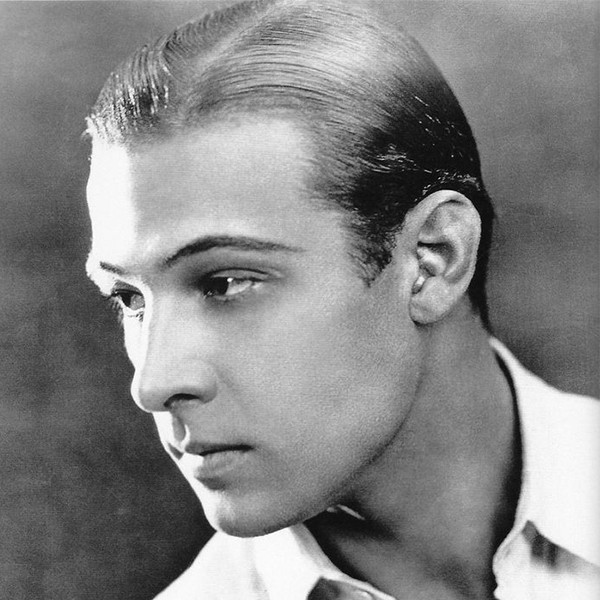 In the following text, I will describe the life story of Rudlof Valentin, one of the best actors and seducers, who left an indelible mark, both in the film and in the lives of many people, especially women!

Rudolf Valentino, real name Rodolfo Alfonzo Raffaelo Pierre Filibert Guglielmi di Valentina dAntonguolla, was born in Italy, 6. may 1895. His mother, a Frenchwoman, pampered and adored him, while his father was Italian, complaining that his son was “too playful”. His father died when Rudolf was only 11 years old.

Valentino moved to the United States with his mother in 1913. In New York, as a teenager, Rudolf earned his living by doing various jobs, including gardening and waitressing. At one time, he was so poor that he was left without a roof over his head and lived on the street.

Although he wanted to dance professionally, his alleged affair with the married Chilean heiress Blanca de Saulijes made it difficult for him to find a job. Blanca’s husband, John de Saulijes, made his life miserable when he learned that he had seduced his wife. Rudolf also spent several days in prison for John.

Blanca later shot and killed her husband while they were arguing over custody of their only son. Fearing that he would have to testify because of that heinous crime, Valentino left New York and joined the theater troupe with which he performed in the musical across the west coast of the United States. 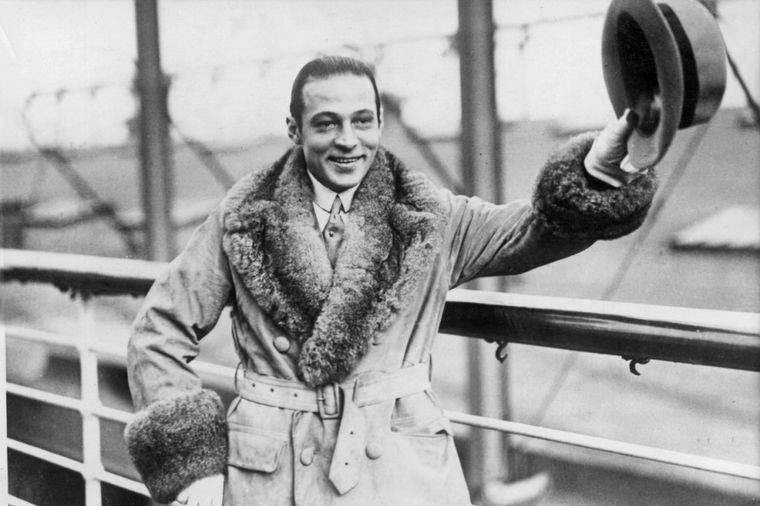 Tango launched him into the stars

During his stay in Los Angeles, Valentino worked as a gigolo, and was a favorite among older, wealthy ladies who lent him their expensive cars, which he loved so much. Namely, the young Italian earned money as a “taxi dancer”, is a dance partner for women who did not want to come to the “dances” alone.

At the urging of his roommate, actor Norman Kerry, Rudolph began looking for roles in films. Initially, he appeared only in small roles and in, almost exclusively, the characters of “Latino villains”. He had his first leading role in the silent film “Four Riders of the Apocalypse”, in 1921, and the scene in which his character dances the tango, gave him the status of a Hollywood sensation overnight.

But that was nothing compared to the hysteria that followed on October 21, when the romantic film “The Sheik” premiered. Although critics concluded that the film would be a failure, because the screenwriters removed the part from the novel of the same name in which the main character, an Arab sheik, rapes a kidnapped Englishwoman and thus changes the point of the film, the audience was delighted with the film. Almost a month after its premiere, on November 20, the film began showing in 250 cinemas across the United States, and the last week of that month was declared “Sheikh’s Week”. This film is also Rudolf’s first film to be shown in his native Italy. The film grossed $1 million in its first year of release, making it one of the most lucrative films of the time, with $200,000 invested in it. 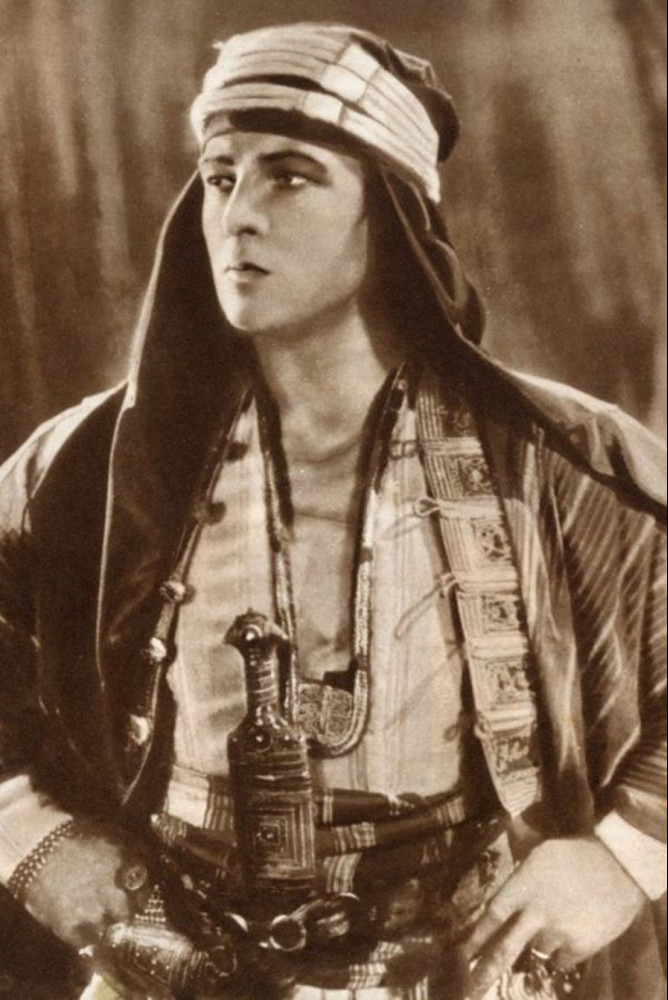 “The Sheik” made Valentine a sex symbol. Women of all ages around the world went wild for his “exotic” appearance and penetrating gaze, while men resented and considered him unmanly. They mocked and insulted him, and film critics did not hide their intolerance towards the handsome Italian.

A seducer without happiness in love

“I hate his classic antique nose and face, I hate his smile, I hate the way he licks and combs his hair”, wrote one critic.

Although he gained the status of a perfect, passionate lover thanks to his roles, Valentino had no luck with women in his private life. Both marriages he entered into ended ingloriously. He married his first wife, Gene Acker, “impulsively”, and that’s how they divorced. The marriage reportedly lasted only six hours, and after Valentina, Aker admitted she was a lesbian.

His second wife was more of a friend than a life partner. Rudolf met the beautiful set designer and costume designer, Natasha Ramova, during the filming of “Uncharted Seas”.

She attracted the actor because of her love of poetry and spirituality. The couple went to sessions together with spiritual advisory, and they wrote songs about each other. But their views differed on the issue of living together. While Rudolf wanted a woman who would give birth to his children and cook, she didn’t even want to hear about it. The marriage lasted for two years. 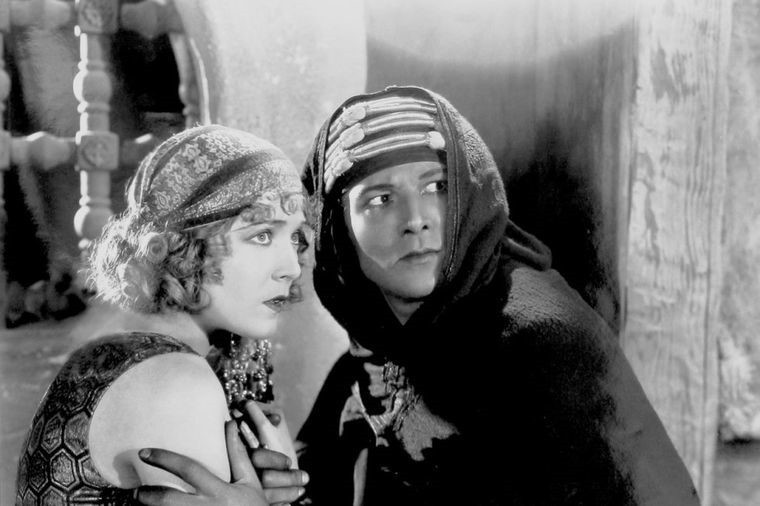 Rudolf, his colleagues and friends testified, spent faster than he earned. With his first “Hollywood” money, he bought a fur coat made of the most expensive fur, a fur-lined housecoat, gilded razors and many other luxury items. When his contract with the studio expired, he had to wait almost two years for a new one.

Although he despised what the film “Sheik” made of his image, because of the debts he found himself in, he was forced to accept a role in the sequel to the film that made him a sex symbol. “The Son of The Sheik”, experienced the expected success at the box office in 1926. Women continued to go wild after him, and men began to imitate his hairstyle, which was named “vaselino”.

Valentino made the film in very poor health. A little more than a month after the premiere of the sequel “Sheik”, Rudolf Valentino passed away on August 23, 1926. The actor died of appendicitis and an ulcer. During his stay in the New York hospital, hysterical fans did not stop calling and inquiring about his condition. The news that the sensual seducer had passed away caused an unprecedented circus.

This is exactly what the media called the day the young Italian died, at the peak of its popularity. On that day, dozens of suicide attempts were reported, and at least three women actually took their own lives.

On the street in front of the New York funeral home, over 100,000 people gathered who wanted to say goodbye to the famous actor. The women fainted, threw themselves on his coffin, cried and hysterical. At the funeral, his coffin was carried by the then biggest “faces” of the film industry, such as Marcus Lo, Adolf Zukor and Douglas Fairbanks.

Valentine’s body was then sent back by train to Hollywood, where the funeral was also held and where he was buried. And in Hollywood, there was chaos on the street, the crowd clashed with the police in order to get to Rudolf’s coffin. His fiancée, actress Paula Negri at the time, fainted in front of photographers several times, and Valentin’s PR agent placed four men in black near the coffin, who were rumored to be “Mussolini’s envoys”.

Valentine’s infatuation did not end with his death. The actor’s spirit remained to “harass” Hollywood. His fans, but also those who are curious and lovers of the paranormal, have been going to spiritistic sessions for years, in order to get in touch with the late star. 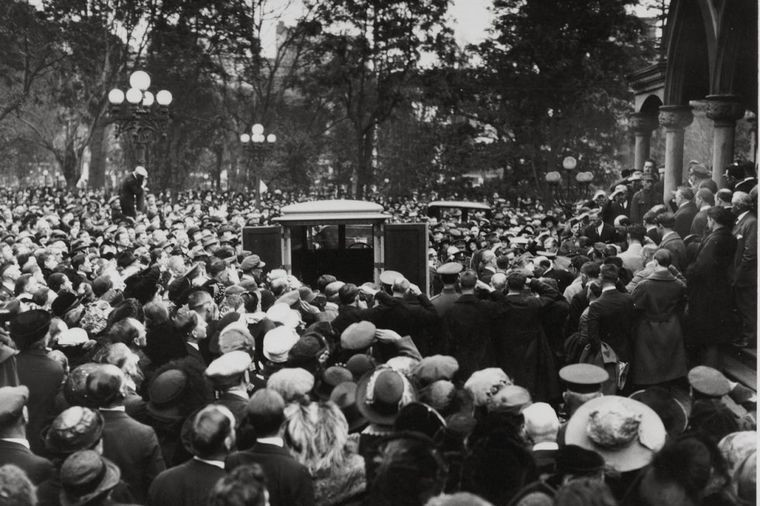 This “cult” was also sponsored by Valentin’s second wife, Natasha Rambova, who described in her book her “association” with the late actor, that is, his spirit.

In addition, since the first anniversary of his death, the mausoleum in which Valentine’s body lies has been visited by a mysterious woman in black who brings red roses. There is a lot of stories about her identity, and the most favorite version is that it is about Dietra Flame, the woman who met Valentina in the hospital. Ditra then thought he would die, but Valentino promised to outlive him. When he died himself, he asked her not to forget him and to leave a rose on his grave every year for the rest of his life.

And “Woman in Black” is reportedly just a media trick devised by Rudolf’s PR agent, but the story was so liked by fans that they started copying Dietra and coming dressed in black to the actor’s grave and leaving roses.

I hope you liked the biography of Rudolf Valentin?