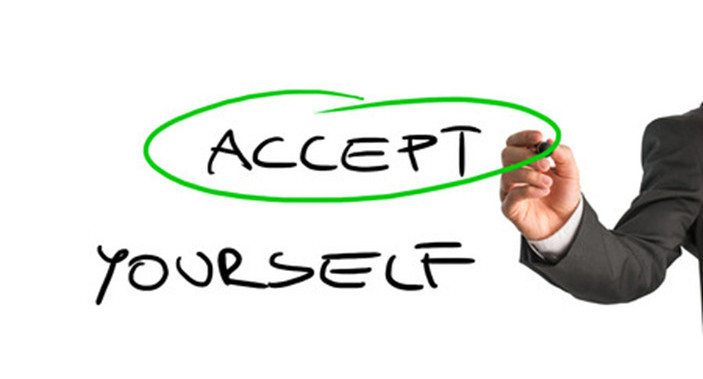 Unconditional self-acceptance is the goal, more precisely the ideal of the final outcome of every good psychotherapy or every good program of psychological personal growth and development.

Unconditional self-acceptance as a concept sounds very nice and simple, but in practice, achieving this goal is a long and difficult process. Why?

Because we have all been taught from an early age (first within the family and later within other social groups) that we “must” think, feel, and behave in a certain way in certain situations (usually the way our parents taught us), and if we don’t do that, then we are bad people, bad people. Since every child (and almost every person) is eager for love, attention, and acceptance, each of us during early, and especially later childhood, adolescence, and adolescence, learned and adopted certain standards and norms of behavior that adhere to as an adult. Some of these standards are of social origin (they are common to all of us who live in the same society and the same culture), and they are part of the heritage of the family milieu in which we grew up. Different values, ideals, and desired life goals are forced on different families (in some families the importance of schooling is emphasized, in some the acquisition of money, in some the importance of togetherness, and family life, in some religiosity…). 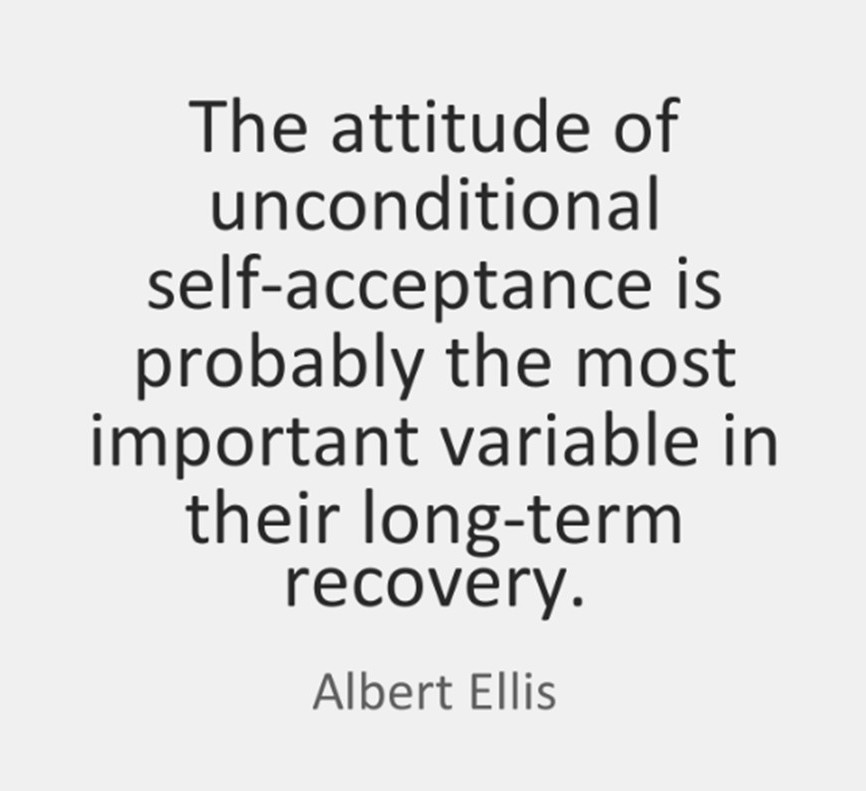 Later, when we grow up and when our personality is formed, we are able (and we do it regularly) to set various standards, life goals, and norms of behavior for ourselves. When we adhere to these adopted or self-constructed standards, we conclude that everything is fine with us and that we have no reason not to accept and disrespect ourselves as a person. But when we break some of these standards, many of us tend to harshly criticize, belittle, underestimate, disrespect, reject, create feelings of guilt and/or self-hatred – in a word, do not accept ourselves as a person as a whole. This kind of attitude towards oneself necessarily brings with it suffering, depression, fears, feelings of guilt, and shame.

The complete opposite of this would be a completely uncritical attitude towards oneself and others, complete absence of any norms of behavior, ruthlessness towards others, selfishness, Machiavellianism (the principle that the end justifies the means), absence of any respect for others, absence of guilt and even guilt brutality, such persons are often called psychopaths and antisocial persons.

While people who are prone to not accepting and self-defeating (these are people we often call neurotics) are harmful to themselves, psychopaths and antisocial people are harmful and dangerous to others and society as a whole.

If we know that this is the case, what would be normal, some middle way, something we call mental health, balance, acceptance, and self-esteem, which also includes acceptance, respect, and appreciation of others. It is just learning how to unconditionally accept ourselves as a person, even when we make mistakes, lose or behave badly.

It is easy for all of us to love, appreciate and accept ourselves, to be proud of ourselves and happy when we act in accordance with all the standards we have set for ourselves and which we consider fair, attractive, and socially acceptable. But what happens when we fail to do that, when we don’t achieve some of those standards (we don’t achieve the desired success in an area that is very important to us, we hurt someone, we make mistakes, we behave selfishly, a loved one leaves us, we feel depressed, desperate, angry, scared, ashamed, etc.), how then to unconditionally accept ourselves and to love, appreciate and respect ourselves as a person even in such situations? 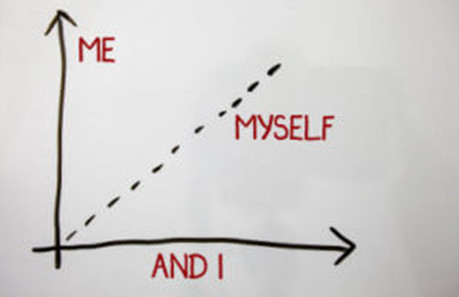 What forms the core of unconditional self-acceptance is precise that we accept ourselves in all situations no matter what happened, or how we feel, think and behave. Does that mean an uncritical attitude toward one’s own behavior and actions? No, absolutely not!!! It is desirable and useful to be critical of our actions, thoughts, and feelings, but not of ourselves as a whole person.

People can learn to accept themselves unconditionally by first learning to distinguish between what they think, feel and do in relation to what they are like as persons.

The first question to ask is whether there are good and bad people?

The answer is clear, they do not exist, because if they exist, it would mean that good people have always behaved well, correctly, and infallibly in every situation in the past and will always do so in the future (the same goes for bad people), which is, of course, an unattainable ideal. Does if I did something wrong necessarily imply that I am a bad person as a whole or was my behavior just bad? Or in other words, if I often do some actions that can be qualified as good, does that mean that I am a good person as a whole? What happens when I make a mistake? Does having my car have bad tires necessarily mean that my whole car is bad and ready for waste? So, thinking that you are bad because sometimes you make mistakes, you behave badly towards yourself or others, sometimes you are selfish…, does not mean that you are a bad person – this kind of conclusion is a logical mistake that we call the mistake of overgeneralization. Think about it, do you judge other people only on the basis of one or a few behaviors (if you do, your estimates are very inaccurate and wrong) or on the basis of one much larger pattern of behavior?

So, be critical of your behavior, your actions, and your wrong patterns of thinking and feeling, but don’t think that you are a bad person because of it. All people are imperfect and infallible beings and therefore often sin, which does not mean that they are by definition sinners. Sinners are those who realize that their actions are bad, but they still consciously continue to behave in this way, because they realize that they have personal gain from such behavior. But most people don’t behave like that in most situations.

Therefore, you can be strict with your actions, you can feel regret and remorse (instead of guilt and self-hatred) – if you did something wrong, it will motivate you to change your behavior and try to correct it in the future. But don’t blame yourself, don’t think you’re a bad person if you act bad sometimes – we all do it sometimes. If you are inclined to believe that you are a bad person, because sometimes you behave badly, think wrongly, or feel some negative emotions, you will produce unnecessary suffering (depression, feelings of guilt, shame, or self-hatred), and thus you will not help yourself.

Some people tend to belittle themselves, self-defeating, not accepting themselves as a person, and even deeply believing that they are bad, inadequate, or even worthless if they have not achieved certain life goals of their own choosing.

For example, if they have not had a prominent career in their business, if they have not been loved and accepted enough by their family, partner or spouse, if they do not currently have a partner and a quality relationship, if they suffer from some physical or mental disorder or if they simply they are not perfect in everything that is of vital importance to them, such people will think they are bad, inadequate or worthless.

Problems arise when the conditions that people set for themselves fail to achieve. Many of us then tend to make wrong conclusions and deeply believe that because of that they are not able to accept and love themselves and that they cannot be happy in life. This kind of belief can be expressed in the sentence: “If I failed to achieve this and that, if I made mistakes in the past, if I was not loved to the extent I want to… I cannot love myself, I am bad, less valuable, or even a worthless person. “It is this attitude, this belief, that leads to suffering, not failures or bad life circumstances. 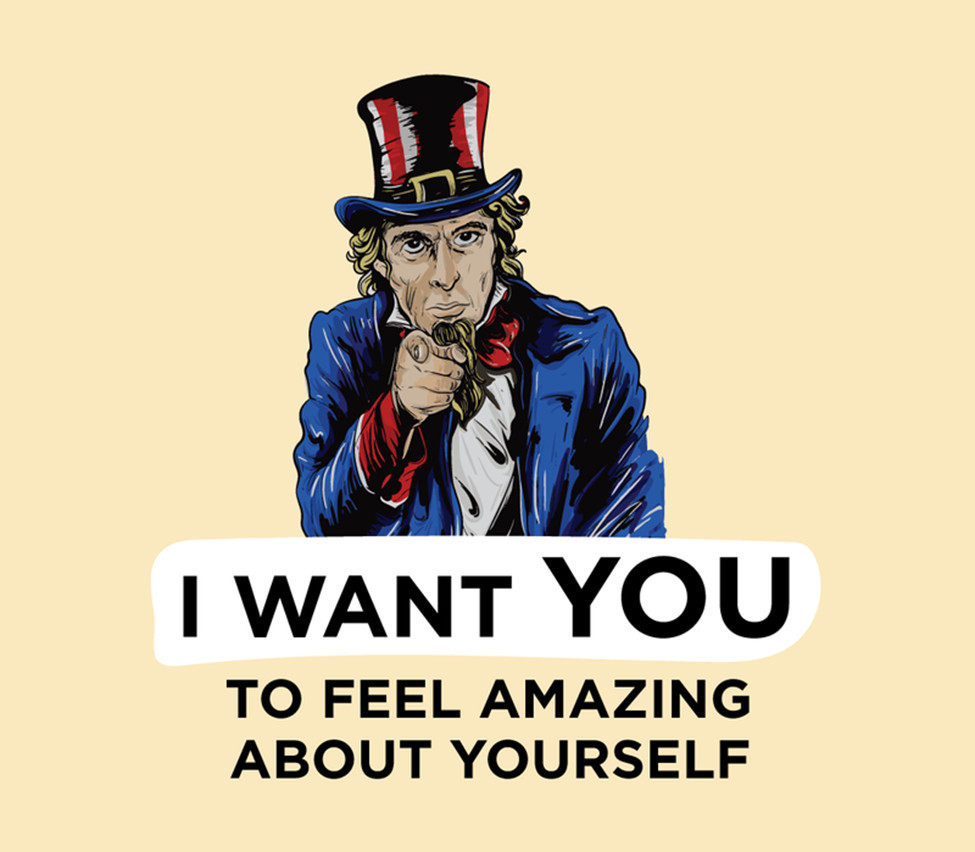 This way of thinking is not only irrational from the point of view of logic, reality, and human nature, but it is also very harmful and dangerous for ourselves and the image we build about ourselves (in layman’s terms – self-confidence). As long as we believe in such irrational beliefs, we will never be able to love and appreciate ourselves, and those who cannot love and appreciate themselves cannot love and appreciate others (family members, friends, partners, their children) …). By dogmatic (absolutist, rigid) adherence to such attitudes, we have condemned ourselves to lifelong dissatisfaction, suffering, and sometimes unhappiness, depending on how far we are willing to defeat ourselves. If you are inclined toward such an attitude towards yourself, think first of all about whether such an attitude benefits you, what do you achieve with it, and will you become a better person if you hate and belittle yourself? Certainly not. It will only create additional suffering and pain for yourself. In addition to the beautiful things that happen to us, life necessarily includes a series of negative circumstances and events that are bad enough in themselves that we do not need additional suffering, which we are only inclined to create on our own.

And finally, be critical of your own behavior, opinions, and feelings that you have, be flexible, and take a position of unconditional acceptance of yourself. You try to change everything you consider undesirable (although it is often not easy at all), but do not judge yourself as a person, learn to forgive yourself so that you can forgive others, because we all sin, people are wrong and imperfect beings.

Say to yourself: “If I made a mistake, I failed to achieve what I wanted… I will try to fix it and do my best not to do it in the future. Just because I’m wrong doesn’t mean I’m a sinner or a bad person. My personality, my identity is something much broader and bigger than my actions, which I can certainly change”.

Be consistent in this new way of behaving. When you habitually start belittling and self-defeating yourself, stop for a moment and ask yourself if it benefits you, if this way of thinking is logical and if in reality there is evidence that you must not make mistakes or that you must achieve everything you imagined. If you consistently oppose your irrational ideas about yourself, they will gradually teach you how to be more flexible, successful, and self-satisfied, you will learn to love and respect yourself, and you will pass on your attitude to other people around you. 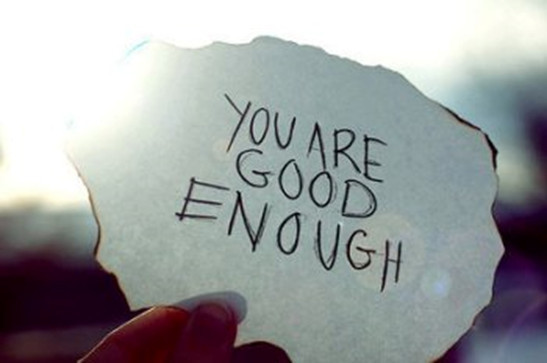