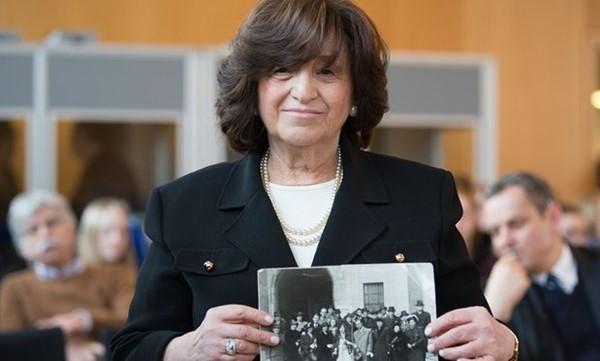 When she was asked to write her name and place of birth in the first grade of elementary school, Angela first became aware of the fact that she was born in a concentration camp.

“I had a lot of trouble with that word”, she says, adding: “I begged my mother to change her. But she said: “No, I will not change her, that should be known”.

Angela Orosz says that at that time she still had no idea what Auschwitz actually means and represents. “It was not a problem for me to be born there. That only caught up with me later, “she explains. “The problem was that it was terribly difficult to write”.

In the text “Your whole life is the Holocaust”, I will describe the life story of Angela Orosz, a woman who was born in Auschwitz, the largest camp in the Second World War!

It took more than half a century until she felt she could tell the story of herself and her mother, who died in 1992. At the age of 60, she finally broke her silence and told a local journalist how her mother, Vera Otvos Bein, gave birth on the upper bed, in the barracks, in Camp C in Auschwitz, in December 1944.

She weighed about a pound and was too weak to cry. “It saved me,” says Angela. Today, she is only 150 cm tall – which is a direct consequence of malnutrition during her mother’s pregnancy and Angelina’s first year of life.

The most courageous move of this 70-year-old woman is the decision to testify against Oskar Groening, a former SS guard, who is 100 years old today and is one of the last Nazis who worked in the camp. She wanted to testify on behalf of the 6 million Jews who could not because they were killed.

“In fact, much more than 6 million were killed. Just imagine all those children who didn’t grow up and have their own children. Not to mention that many Auschwitz survivors will never be able to give birth. And, as we know, there are many children who suffer from hormonal disorders, as a result of chemicals given to their mothers. I’m not a mathematician, but you don’t need to be to realize that 6 million is a very misleading number”.

Orosz watched Groeninga’s she recalled her story on February 26, 2016, in the courtroom in Detmold, talking about her parents who were brought to Auschwitz on May 25, 1944. Even then, her mother was in the third month of pregnancy.

“My mother was separated from my father and never saw him again. When she went to Mengele, she told him that she was pregnant, hoping that she would have compassion… Mengele snapped at her “You stupid goose!” And ordered her to move to the right side”. This means that she was chosen for forced labor, instead of a gas chamber. 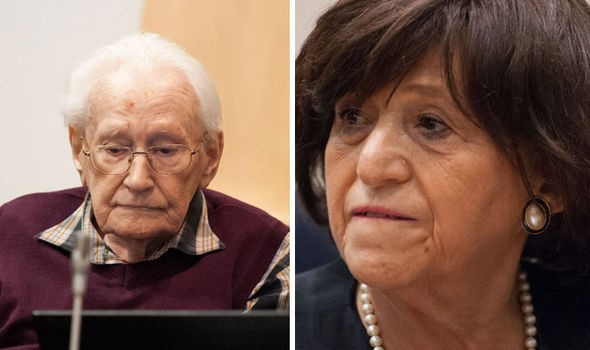 Angela’s testimony is crucial in a case in which prosecutors gathered a handful of survivors of 425,000 Hungarian Jews who have deported en masse to Auschwitz between May and July 1944. 90% of them did not survive. The trial is based on the fact that Groening worked in Auschwitz as a guard during that period. By his very presence there, according to prosecutors, he was part of a machine that killed and tortured and is accused of complicity in the killing of 170,000 people killed between May 17 and June 12, who is known to have been there.

Orosz tells her hope rests on Groeninga’s decision to speak out. He promised to remain silent until she told him in court: “You know what happened to all these people. You made it possible for them to be killed. Tell us! Tell us!

For all critics who think it is inhumane to put a 94-year-old man on the dock, Orosz has a strong message: “So what if he gets the death penalty?” At 94, you have no expectations of life anyway. If he can sit, listen and see, if he can eat, then he can also appear in court. He was part of a killing machine. What about my father who was killed at the age of 32, while someone like him could live happily ever after? After all, it doesn’t matter how many years in prison he could get, the truth is that he will definitely not go to prison.

What is important is that he could say that what happened in Auschwitz, what he did there, what he saw, because it will go down in history and in books, so those who say Jews are lying will be able to hear what also happened to someone who was a Nazi”.

Angela’s understanding of her origin came slowly to her, during her childhood in Hungary. “I remember that every Saturday night, all Holocaust survivors came to our house. I sat at the table and listened to what they were saying. They always said “camp this, camp that” and they would bring with them items from Auschwitz, a cooking spoon, blankets… and slowly, I made up pieces of the story”.

At the age of 11, she learned the whole story of how her mother was forced to work. When she was seven months pregnant, Mengele’s team chose her for the experiment. They injected a burning substance into her cervix. “Right behind, in the womb, was the fetus, me. These injections were horrible, painful. The first injection, the fetus would move to the left… the next day, the second injection, the fetus would move to the other side”.

And then, somehow, the doctors forgot about her mother. The pregnancy was not seen, because Angela was very small. “If it weren’t for that, we would both have been killed before I could breathe my first breath,” she says.

Later, her mother told her about another woman who gave birth. Mengele tied her breasts to see how long the baby would survive without breastfeeding. “Shortly afterward, they were both killed”.

A sympathetic doctor from Hungary offered Angela’s mother to have an abortion, believing that it could save her life. But she refused. When the birth started, that doctor helped her. She got bedding, hot water, and scissors. “She told my mother to climb to the top of the bed. In the barracks, the beds were on three floors. She followed my mother and helped her give birth”. 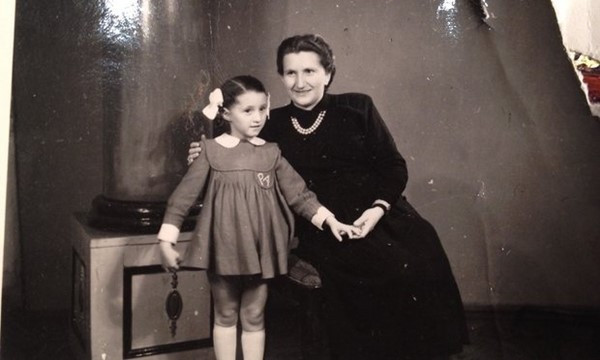 I was born three days before the celebration of Christmas, so probably on December 21, 1944. I was very malnourished, I couldn’t even cry. That helped keep me from being discovered”.

Three hours after the birth, Vera Bein had to leave her baby on the bed and go out in the icy weather because of the roll call, she only wore rags and wooden clogs. “She prayed all the time that I would still be alive when she returned”, Orosz added.

Five weeks after giving birth, Auschwitz was released. On that day, January 27, 1945, another child was born, Giorgi Faludi. “His mother was so weak that she didn’t have milk, so my mother breastfed us both.” Shandor Polgar, another survivor, discovered Bein and the baby and insisted that they go to the city of Auschwitz, which was called Oswiecim before the Nazi occupation – in order to enter the baby in the birth register.

“I guess he really wanted to make sure I was recognized because he lost his wife and child in Auschwitz”. Polgar later married Angelina’s mother and became her stepfather.

When she was one year old, Angela weighed only 3kg, which is the weight most babies have at birth. “All the doctors refused to treat me, thinking that I would die. Even my grandmother told my mother to let me die because I will never be an ordinary child. However, one of the reproaches turned me upside down like a chicken, and when I raised my head, he said – this child will live”.

Her bones were so weak that she could not walk until she was seven. “All my socks were thick, knitted to cover my thin legs. All my dresses were full of lace and tight to make me look fatter”. 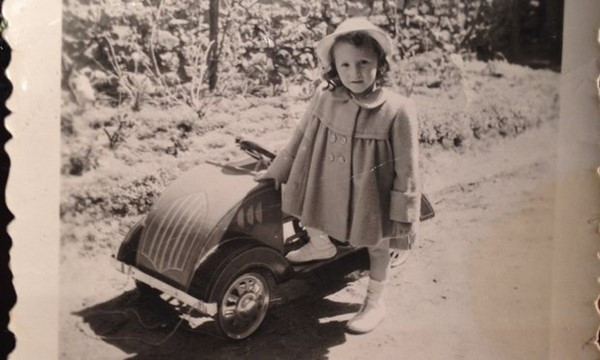 Some time ago, Angela received an invitation to talk in Dresden about her experience of how mothers pass on the trauma to their children.

“I received an invitation to speak back in August. However, I felt that I was not a relevant speaker on the subject. I’m normal. But then I called my children and my daughter gave me a list of reasons from here to China why I am a typical example of a Holocaust survivor. She talked about how I sent her shopping on my own when I was three because I wanted her to be independent, in case the Holocaust happened again. Also, I kept telling her and her brother, “Your generation would never have survived the Holocaust because you are spoiled.” When she told me how much she was afraid of childbirth, I told her: “Are you afraid? You have a house, a husband, and a nurse, are you crazy to be afraid? ”

“Mother, your whole life is the Holocaust”! Said Angela’s daughter, and Angela admits that she did not understand that until then.

Her children supported the trip to Germany and the testimony. “They teased me and said, ‘You haven’t been to a psychiatrist all your life, and now you’re talking to 225 at once.’

Elegantly dressed in a black dress with a string of pearls, Angela speaks with a heavy Hungarian accent, despite having spent 40 years in Canada. For years, she was afraid to testify, due to the nervous stomach pains that came when she talked about her experience. And then she saw how much the media coverage of the Oscar Greening trial was and heard an example of how another survivor got up and hugged the former bookkeeper in Auschwitz as a sign of forgiveness. “It simply came to our notice then. I sent an email to my lawyer to tell him that I was coming to Germany immediately.

I wonder, how to forgive these people? I certainly don’t have that in me”.

When she visited Auschwitz for the first time in January 2015, to celebrate the 70th anniversary of her release, Angela tried to find the barracks where she was born. However, it was a dead-end, because that area was closed due to the commemoration.

“I will return because I have a strong desire to see where my mother was, to touch the place where I was born and try to feel how she felt. I am still haunted by the idea that in normal cases, when you give birth, you go home warm, with a partner next to you, afraid of the responsibility that follows, and my mother had no future, no food, nothing. Still, she believed I would survive. She told me that I looked like a bird without feathers and that I was very ugly – but, of course, not to her”. 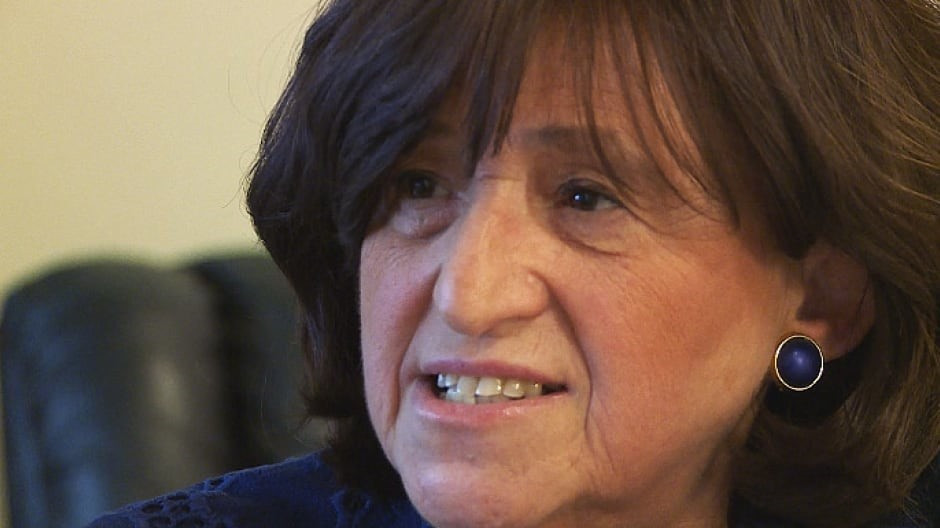